Joined 1 mo ago
·
3 Posts
Greetings everyone,

Recently, four days ago, I lost one of my two little guys, Loki. This was six days after taking him to the vet for sneezing and breathing issues. He was taking his medication and pretty much acting as normal, and it appeared he was doing better. However, he didn't make it to the next week. My other little guy, Thor, was alone and I had read it would be good to get him a housemate to keep him company. So on Monday I went out and found a new friend, Domino. I listened to a roommate who suggested integrating them with vanilla, so they would think they both had the same scent, in the bath tub for about 30 minutes or so. This had worked well with Thor and Loki, so I did it. There was some minor nipping from Thor, but nothing too worrisome. I then placed them both into the house where I housed Thor and Loki. Domino basically would stay completely still, unless Thor became more aggressive. After about 30 minutes, I went over and checked on them and noticed a pretty nasty cut on Domino. I separated them and cleaned out the cut as best I could. Currently Thor is in his house and Domino is in a smaller and older house I originally used for Thor and Loki but cleaned it and put it away. I have placed the houses next to each other with enough distance so they can see and smell each other, but no nipping or swiping will occur. Thor is spending a lot of his time watching Domino. I am not sure if it is aggressive or curiosity.

Any and all help would be great. Thank you.

Joined 3 mo ago
·
227 Posts
Next time you introduce them to each other, make sure to watch them in case they fight. There are two ways you can introduce them, the way you did on a neutral territory which is quicker but can result in fighting, and a longer method like in these articles by joinrats: 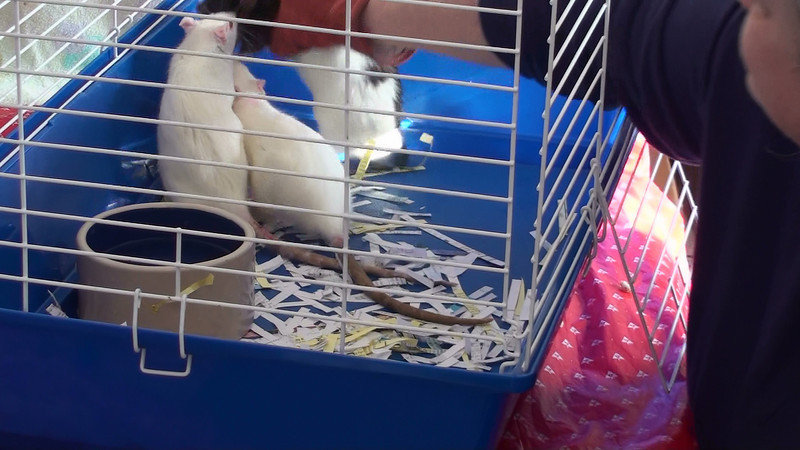 If your going to try to introduce them again make sure to watch them very carefully and break up any serious fights that happen, they can easily injure each other.

Joined 3 mo ago
·
227 Posts
Also watch carefully the body language passing between the two rats, if one's fur is puffed up or they are frozen then they might be feeling overwhelmed or uncomfortable, when this happens you want to slow down the intro since your trying to get your rats to like each other instead of feeling threatened.

Joined 1 mo ago
·
3 Posts
Awesome, thank you for taking the time to help

Joined 1 mo ago
·
3 Posts
How can you tell if a pet rat is showing aggression towards another. While my two guys are in separate houses, the one continually looks into the other house and will have his back arched. The other one is not doing this and tending to avoid the one that has his back arched. Also, if the one who shows aggression comes near him, he squeaks pretty loudly.

Joined 3 mo ago
·
227 Posts
Yeah those sound like they are signs of aggression vrs. fear which is why it's good to do this step before putting them together, this way they can get used to each others smell from a distance and get over aggression without fighting. Once they don't react towards each other you can move on to the next step which is to switch their cages, this way they can be in each others territory without having to fight. Eventually you'll be able to introduce them face to face
Here's an article on rat body language so you can decipher it on your own: Major Rat Body Language - RattyRat - JoinRats
C

Let your rats get to know each other over the course of at least a few days before you attempt to put them in the same cage. Be sure you know they're getting along before you expect them to live together.
1 - 7 of 7 Posts
Join the discussion
Continue with Facebook
Continue with Google
or sign up with email
About this Discussion
6 Replies
3 Participants
Last post:
CorbinDallasMyMan 1 mo ago
Rat Forum
A forum community dedicated to Rat owners and enthusiasts. Come join the discussion about breeds, health, behavior, housing, adopting, care, classifieds, and more!
Full Forum Listing
Explore Our Forums
General Rat Topics Rat Health Rat Behavior Rat Homes Meet My Rat
Popular Communities